A Song Story by Christine Clifton 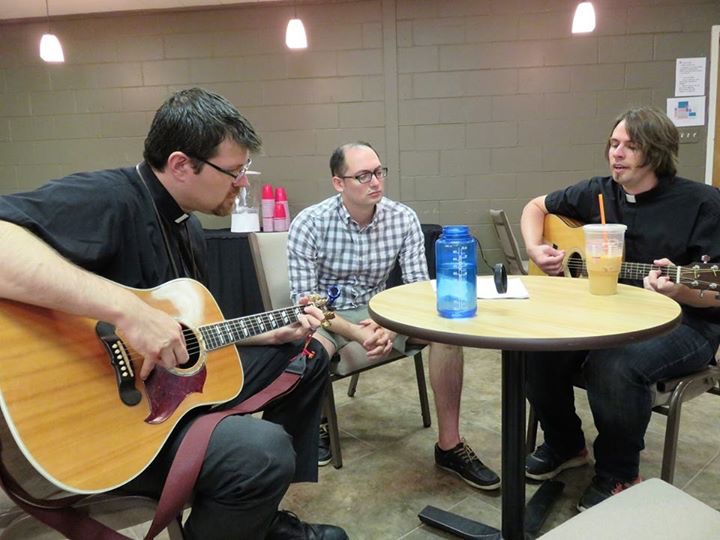 A group of people came together this week to set aside space in this busy season for songwriting. We didn’t all know each other when we began, but after a day of working and worshipping together, there was a common sense that the Lord was knitting us together as family.

I would like to share a piece of my story with you. You see, I am not actually musically trained. I do not play any instruments and I do not know how to stay on key when I sing.  I went to the first retreat mostly to support my husband, but also because I had helped him with the lyrics for a few songs he had written. I didn’t understand how I could be used in this particular setting, as the goal was to use the words of liturgy already written  to create fresh music. The Lord began to show me how to combine the deep spiritual truths of the liturgical prayers, passages of scripture, and what He was speaking to me personally. It became a healing process to dig in to a place in my heart and my thoughts that weren’t yet agreeing with the Lord.

During last year’s Synod, I woke up in the middle of the night with the words from the Lord, “Where I am leading, timidity can not follow. Timidity has got to go!” The following morning, during a time of prayer, the speaker named timidity as one of the issues to which he was sensing the Lord wanted to minister. The Lord began the work in me that morning. I have been struggling this past year regarding understanding my specific passion and focus in ministry. I was facing extreme timidity in being in front of groups as well as declaring, “Yes! THIS is what brings me joy. THIS is the direction the Lord is leading me to focus in ministry.” What if I was wrong? What if I wasn’t actually good at what I thought I was being called in to doing?

I brought all of this with me to the picnic table that beautiful spring morning, just a few days ago. I had this stuff wrestling in my mind and my spirit. I really didn’t think I was going to come out of our creative time with words for a song. But God is faithful. I set my stirrings down at His feet and asked Him to help me process this battle between passion and timidity.

The theme for the 2017 Synod was “Growing Churches that Connect.” The liturgy packet they prepared to help aid the creative process was filled with liturgical elements from Ordinary time, Bible passages on the mission of the Church, and quotes from missionaries and church planters.

I read the familiar words of the post communion prayer “Father, send us out into the world to do the work you have given us to do, to love and serve you as faithful witnesses of Christ our Lord.” The next page had Isaiah 61, and on the following I saw a quote from William Borden that said “No reserves. No retreats. No regrets.” This combination hit me someplace deep inside and I began to weep. He has sent me as a witness of His glory, of His goodness made manifest here and now! This is my passion. To do the “stuff” as John Wimber was known to say, to teach and train others to walk in newness of life, and share the story of God’s kingdom come here on earth, in me and through me for the sake of the world!

Is 61 says he came to proclaim good news to the poor, to bind up the broken hearted, to release prisoners from darkness, to comfort and bring joy. Jesus completed the work He was sent to do on the cross. John 20:21 says, “Even as the Father has sent me, so I am sending you.” Can it be that simple? I desire with my every being to have a great big yes in my heart to Jesus at all times. I don’t want to hide in fear, doubt, timidity, or anything else!

This song is my declaration to the Lord that I will go and leave timidity behind. I will remember that He has given me authority to do the work He has called me to do. If He ordered it, He will pay for it. Even when I don’t know what I’m saying yes to, I know to Whom I am saying yes!

When we gathered to share our music during the song sharing time, my husband, Justin and I only had the beginning of a melody for the chorus, but had been struggling to find the right sound for the verses. After the group had heard the completed selection, Dave said he was sensing that it needed to be finished to play in the morning at Synod. Ok, how was that going to happen? We had an hour of creative time in the morning to finish! So we prayed.

One of the amazing things about United Adoration is that it brings artists together that would not normally do so otherwise. Four of us worked to complete the song and in and hour it was completed. We had just enough time to input it in to the computer and teach the band how to play it before Synod began.

A feeling I can’t describe welled up within me as I heard the entire Synod gathering joining in worship and declaration as they sang a song that the Lord used to heal my own heart. We sang it every day in our gathering. After the final sending out, Bishop Ron Jackson said that the song was not only a theme for our time together at 2017 Synod, but a marching song for the diocese in this season. Wow. Bless the Lord!

I have been to several UA songwriting retreats and the same thing happens every time. Yes, songs are written, but deeper things are happening as well. Friendships are grown, healing transforms hearts and relationships, connections form across the country, and unity is strengthened. And now, we have a common experience and a song that is uniquely ours as the diocese of the ADGL. We will keep moving forward and not retreat, no reserves, and no regrets! Here we are, Lord, send us!

Click the link below to listen to a live recording of “No Looking Back” from the 2017 ADGL Synod. Download the MP3 and Lead Sheet for free.