Every Person Has a Song. Every Song Has a Purpose 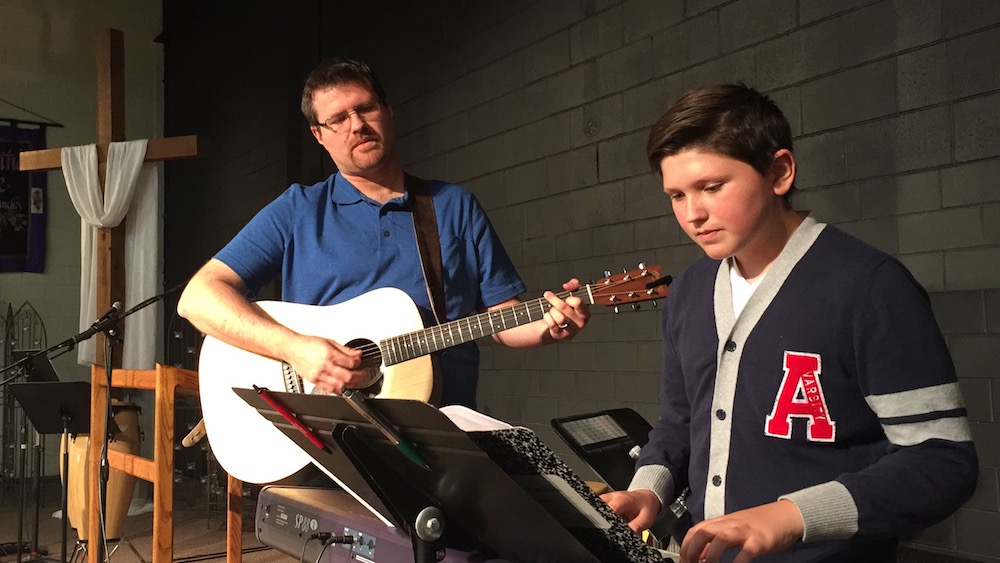 Every person has a song.

Song writers often have a lot of anxiety when it comes to writing songs, especially for the church. We get in a mentality that it’s imperative to write the next big song, or else, somehow, our time spent in worship and creativity was not “worth” it. This usually derails our ability to connect with God in any real way during the process and self-destructs our creativity. But this fear and expectation comes from a wrong way of thinking. In the big book of worship songs in the Bible, Psalms, you’d be hard pressed to find anxiety as a real launch into the presence of God. Don’t dwell on the song, dwell on the Song-Giver.

My beginnings in songwriting came about through something the Lord was doing in my heart (drawing me into a close relationship with him). My motivation wasn’t about whether my song was going to be played at church or picked up by Chris Tomlin. I saw the act of songwriting as pleasing to the Him, an act of worship itself. Let’s not put the cart before the horse, the songs before the song-giver. Just Knowing that the act of writing is worship frees us up to engage the Holy Spirit and lay our anxiety and fear of what others think aside.

Every song has a purpose

I’ve written hundreds and hundreds of songs in the past few years. Some have been played in church and some haven’t. Some of them were good, others were ok, and some of them you’ll never hear played. Every one of them had a purpose, but not every song’s purpose was to be played in church. I want to run you through a few purposes a song you write may have in your life and in the life of the church to expand what you would consider a “worthwhile” song.

The very first song I ever wrote was precious, based off psalm 23. The Lord had been showing me that he had been leading me through hard times and broken dreams. It was really a monument to Gods faithfulness in my life. When I hear it, it makes me tear up. But it’s not a very “good” song, as it won’t be played in any church or picked up on the radio. However I still listen to it from time to time, during my personal worship, and it reminds me how far the Lord has brought me. The songs purpose was to be healing for me personally.

As a family man, it’s hard to get young kids to pay attention during morning and evening prayer times. So, I decided that I would write short songs (and it needed to be with young kids) for the morning and evening that the five of us could sing each day to God. They are 30 seconds long and not in a format for “corporate worship”. But we’ve been singing it for years now, the boys know it by heart, and they know what follows will be a time of prayer and scripture. It has become a rhythm of worship in our family, one I’m sure they will remember their whole lives and it is a special memory for us. The song’s purpose was to call our family into God’s presence each day.

Around the time when one of my friends had passed away after losing his battle with cancer, I had come across a hymn “Abide with me.” It was written by a man who struggled with health issues that eventually overcame him two days after he finished writing the words to this hymn. I was thinking of my friend and his place in glory, along with Henry Lyte, the writer of the song. I wrote an addendum to the hymn, not that Jesus would abide with us now in hard times, but also that we would abide with him in eternity. And so the song was born. I played the song once in church, and it was the right song for the right moment. But I haven’t played it since. The song’s purpose was to remind us as a local church that our home is eternal.

Anthem for our Church

Our church had been going through a season where we were trying to rehabituate minds to all the promises of who we were in Christ now that he is risen. I had written a song for my kids to remember these but I played it for our church one Sunday. Because of what God was doing already, it had become the anthem in that season as we corporately walked out our new identity. And it’s still played. The songs purpose was to be a reminder for us as we walked through this season.

And then there are songs that seem to speak prophetically beyond the platform of our local church. These, although not as frequent, tap into a heavenly nudge that goes beyond the area and is for a city, nation, or even the globe. These always seem to the be the ones we aim for because we expect these songs are more important than the others, and these are the top 20 most churches sing on Sundays. They are great songs and we accept them into the global body of Christ as a gift. However, these are few and far-between and are for a different purpose. This does not make them any more or less important, they just have a different purpose.

The goal of UA is to give us a sacred space for local writers to hear what the Lord is saying. This is important in local congregations all the way from the mega-church in the suburbs, to the local church on Main Street, to the house churches. The Lord speaks to all of us. He is the song-giver and the reason we write. He gives his church everywhere songs for every season and purpose, personal to around the  globe, for his glory and the healing of his church.

So let’s begin at UA and in our local churches to reframe songwriting’s purpose and judging its fruit. Every person has a song. Every song has a purpose.