Search My Heart – A Song Story 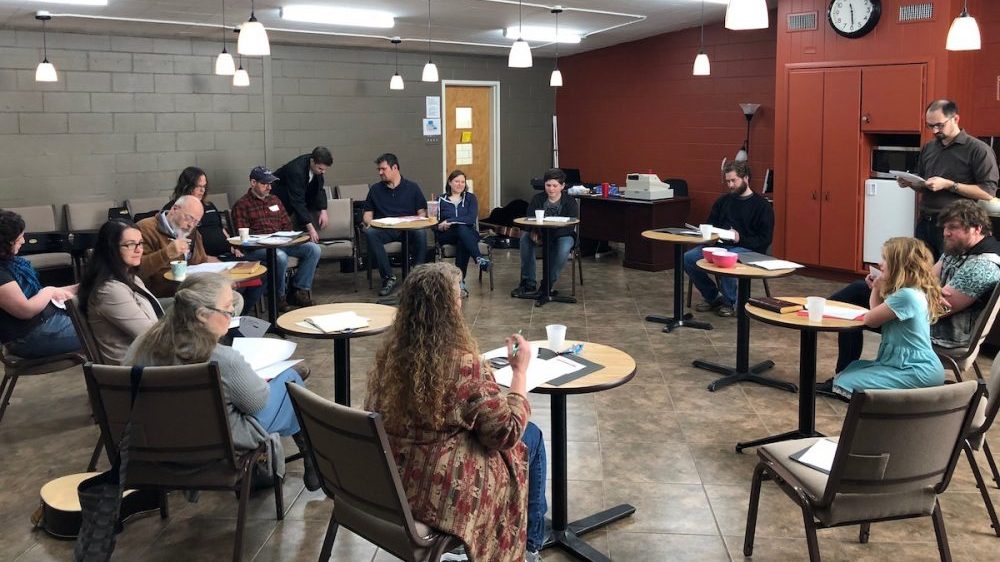 Amidst the bustle of synod preparation, the air was sweet with the sounds of new songs. It seemed the church hallways carried a different melodic tune every time the draft changed directions.  I was standing, guitar in hand, looking out into the courtyard where the sun was shining on the grass.  I’d just been wandering the building, joyously listening to the songs being written at the United Adoration songwriting retreat this past week in Fort Wayne, Indiana.  Justin, co-founder of UA, walked up beside me.  “Hey Ryan, when you get a sec, I think we have it!”

“It” requires some backstory.  We were sixteen songwriters gathered in prayer to hear and write songs from the Lord.  This United Adoration songwriting retreat was one day at the beginning of the diocese’s synod (regional gathering) and we had high expectations.  A handful of the attendees had never experienced a UA retreat before, but in true UA style, the fun creative process quickly got us laughing together.  In the six retreats I’ve experienced, every one results in a deep connection with God and with each other, as well as some incredible songs.  This time, however, we had specific hopes.  We had asked God if He would give us one, or more, songs to bless the synod and the churches represented.   The theme, “Maintaining Your Interior Health”, didn’t immediately yield any lyrical ideas, so we went to the Lord and asked Him to give us songs.

Isaac, a faithful attendee of several retreats and a man that yearns to see more of God, had been journaling on Psalm 51 and the confession of sin.  “Search the caverns of my heart, know all my thoughts…”  He’d written a lot of song fragments and words, but hadn’t been able to break through to a fully finished song.  He opened up his work to Justin and invited him to collaborate.  Justin was taken with the phrase “search my heart” and began to write a melody.  The two of them worked on the song until it hit a block, at which point Justin roped in a few more people.  When I heard the opening melody, I felt in my spirit a resonance and I got really excited about the song.

As Christians we aren’t meant to go it alone, we’ve been given families and communities that help us through the tough moments.  So it is with songwriting—our gifts aren’t to be used in isolation.  This song couldn’t have been written in one day except for Isaac opening up his inspiration to the people around him and allowing us to change and add to what he had.  That can be a scary process!  But what comes out of it is not only a better song, we were able to bless and affirm each other throughout that process.

After writing together, laughing together, and playing the songs that had been written that day (and there were so many really good songs!), we had a ministry time of thankfulness, healing, and praying for each other.

The following day we debuted the song at the synod gathering, where 200 people were gathered for a time of teaching.  When we started the song, it seemed like the whole room sang along with the FIRST LINE.  It was as if they already knew the song!  We were overwhelmed!  God had once again given us a song that totally fit what He wanted to do in His people.  At this point we probably shouldn’t have been surprised, but when we entered the time of teaching, the song lyrics were woven throughout the material.  Without knowing the topics, we had written a song that would help the synod attendees digest and respond to the teaching!  Who but the Holy Spirit could so specifically pull all that together?

This is what I love about UA—it’s a simple and refreshing format, but when we take the time and space to listen to God alongside brothers and sisters in Christ, we get the chance to be a part of God’s mission!  And His mission is so much bigger and more exciting than I could ever imagine.