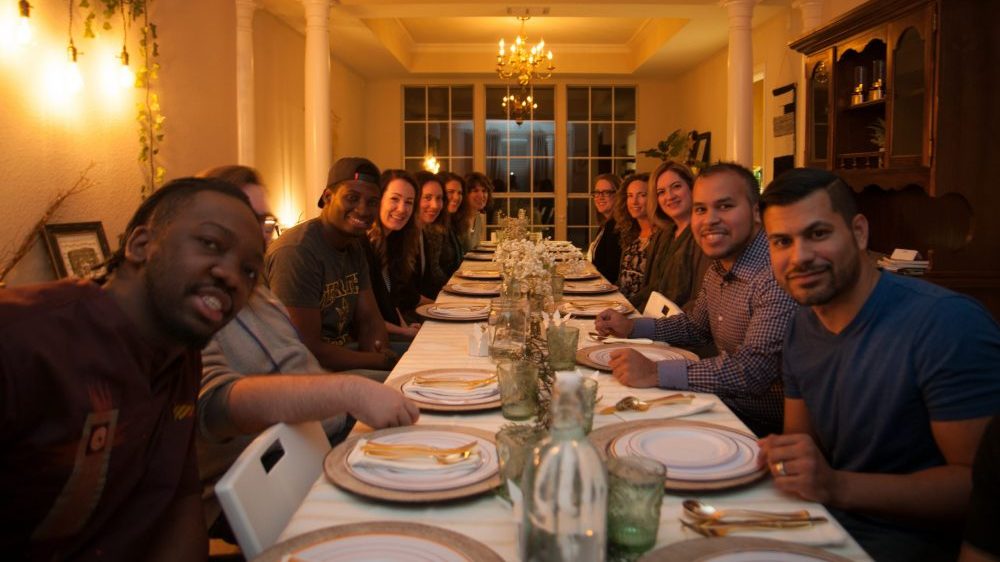 UA alumna Christina Jelinek is a powerhouse for music and community-building. A member of the Southlake, TX, campus of The Village Church, she serves as a Program Director for Apartment Life, a nonprofit seeking to build community in apartments to see them transformed through connectedness. She is also the founder of Leaven + Liturgies, a monthly meet-up for creatives seeking to live out the gospel in community. This group’s first collaborative album, entitled Eight, comes out this week on August 28. Here, she explains the heart behind Leaven + Liturgies and the album Eight:

What’s the story behind Leaven + Liturgies?

During my time in the Arts Fellowship at TVC, I started a meet-up for creatives called Leaven + Liturgies. The heart behind it was to create an environment for the creative to come and learn their identities as co-creators with Christ as well as enter into the true story of the gospel together. We met this year at the changes of the liturgical calendar: Epiphany, Lent, Eastertide, and Pentecost.

Leaven: We break bread together over a tasty meal. Leaven is also seen in the scriptures as something pervasive to culture whether for good or evil. Art is a powerful influence within culture and it’s critically important that what we produce as believers doesn’t replicate chaos but rather creates “cosmos from chaos” as Madeleine L’Engle would say. Liturgy is “the work of the people” – I have seen from my time in The Village Institute that theology is best done within community. The hope of gathering together is not only to focus our mind around the Christian story and the liturgical calendar but to practice responding to where God has us in that moment with whatever creative abilities the Lord has gifted us with. We’ve had graphic designers, dancers, singer/songwriters, painters, photographers, and bakers all come through.

The flow of the night starts with a meal together. As we eat, there are discussion questions and readings of prayers and other resources (like the Seasons guide from The Village Church). The second half of the time together is for creatives to share what they have been working on and to collaborate together.

One of my favorite parts has been setting the table every season with the theme of the liturgical season to stir our hearts and give a visual representation of moving into a new part of the year.

How did Eight come about?

The idea for the album started with my sermon notes from a series JR Vassar preached at Church at the Cross in Grapevine, Texas called “Eight.” In that series he unpacks the text of Romans 8. My notes from those sermons would later turn into poems that became melodies and songs. I needed to respond to the content. I needed to say through poetry or song how the beautiful realities of “no condemnation” and “no separation” were transforming my heart. I wanted to memorize the text and “get it into my bones.” I honestly never thought that I would record these songs. They were for me, a time of communion with Jesus. These songs stayed tucked away in a journal for the most part.

I was given the opportunity to be a part of the Art & Business Fellowship through The Village Church.  I was challenged to think about a project I wanted to complete that would edify the church and that could be featured in a gallery and presented to peers. The Village Church connected me with the producer for this project and helped to complete the first two songs. During the production process I began to wrestle with releasing music as an individual artist. My heart longed  for community. I wanted so much to share in the process of creating and dig into theology within the context of community as I sought to unpack the rich theological truths of Romans 8. One of the central themes of the Training Program at The Village Church (the year-long theological education track that accompanied the Art & Business Fellowship) is that of God establishing his dwelling, dominion, and dynasty. In addition to these main themes (which you will hopefully find in the lyrics of Eight) we learned that theology is best done within the context of community. If my hope was to create theologically rich, scripture-saturated music, I couldn’t do it alone. I began to pray and ask the Lord to show me how he has wired me for his kingdom work and to open myself up to the desires that Jesus has placed within me. I think that sometimes the places of our deepest purpose come from the places of our deepest pain. I can remember feeling so lonely and unaffirmed in artistic desires. I remember weeping before the Lord just asking for an opportunity to grow and be heard when it came to music. Leaven + Liturgies was formed because someone modeled for me what gospel hospitality is and I knew that in the way I was comforted he would allow me to comfort others (2 Cor. 1:4).