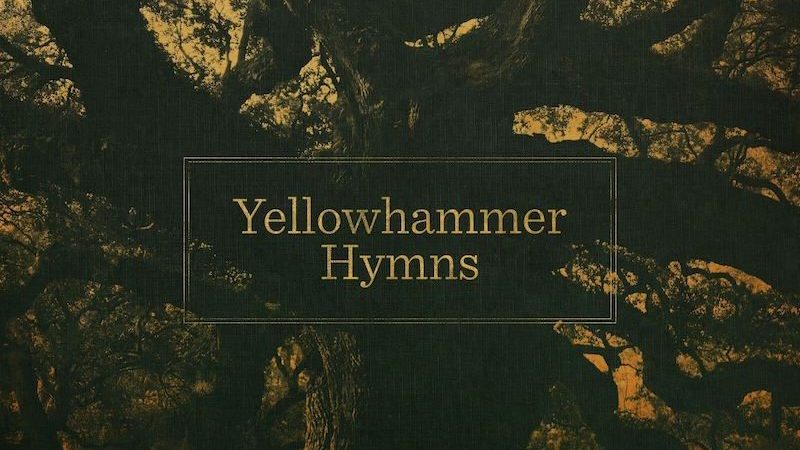 Recently, we talked with Andy Zipf & Pastor Chuck Colson from Christ Church Presbyterian in Jacksonville, Florida about their new project, Yellowhammer Hymns. Andy is the Director of Music and Artist in Residence and Chuck is the senior pastor. Learn more about their unique collaboration!

How did the two of you meet? And when did you start writing songs together?

Andy: We’ve actually known each other for over a decade. In 2010, Chuck was planting the Church of the Ascension in Arlington, VA.  After years without a spiritual home, my wife and I began attending the church. Though slightly foreign at first, we were drawn to the liturgical style of worship that emphasized the congregation’s active participation in the service. A year or so later, I offered to play guitar in a service. I’d been a working singer songwriter for a several years at that point. I was hesitant about re-engaging with church music after a long break, but Chuck gave me some space and we developed a friendship. A couple years later he sent me some lyrics that he’d been working on. I made some arrangement suggestions, came up with a folk melody, and sent him a quick demo. That became ‘Christ Our King’, which is track two on the Yellowhammer Hymns album. It was our first hymn and stands as a memorial of sorts to our partnership.

What does your writing and collaboration look like? What is your process?

Chuck: The majority of the album began with lyrics I’d scratched down from meditations on Scripture, especially the Psalms. These hymns were not written in a studio; they come from the trenches of pastoral life. Each has its own story.

As you’d expect, there is no clean, predictable process. After taking a look at the initial sketch, Andy and I would run through the theological concept, lay out various passages from Scripture, discuss the vibe (meditative/mid-tempo, triumphant/up-tempo), and talk about where the hymn belongs in the service (ex. Call to Worship, after confession, communion, end of the service) or what church season we wanted to capture (ex. Good Friday, Easter, Ascension hymn). At that point, Andy would go away for further reflection on Scripture, work on melodies, and smooth out the poetry. Andy would come back with an arrangement. Typically, we’d work on the lyrics again after the tune fell into place. For instance, we had only one verse written for ‘Let’s Go Up to the House of God’ (the third track on the album) when Andy came up with a tune. The rest of the lyrics came together as Andy and I texted back and forth over the course of two days. Honestly, there has been a mysterious, spiritual element involved in each of these hymns that has been interesting to witness.

Inspiration comes from slightly different angles for us, making our partnership a stimulating and beneficial venture. We have a mutual respect for each other and recognize one another’s gifts.

Chuck, what advice would you give to pastors who struggle to understand their chief musicians/music directors?

Chuck: Good question. I’ve found it very helpful along the way to educate myself, as much as possible, about liturgy and church music (history, musical theory, theology). If you are not a musician (and I am not!), this is especially important because your director will appreciate the effort to enter their world. It affirms the work they do, the beauty they create, and the importance of music for worship.

I’d also encourage pastors to collaborate with their directors in the construction of worship services. It keeps the pastor and musician from operating in silos, generating an environment in which the entire service is crafted and tailored for a congregation. This creates a partnership in which respect and trust are built. Additionally, when liturgy, sermon, and song coordinate on Sunday, it is especially helpful for the spiritual formation of the congregation.

Further, such teamwork is critical. It creates relationships where feedback and healthy criticism can flow both ways. We all need that. I’ve benefited deeply, in my own spirituality, from my relationships with three musical directors—Rachel Wilhelm, Meredith Williams, and Andy Zipf. They’ve all offered critiques that have helped me tremendously in my preaching and leading.

Finally, the pastor must have the musician’s back. Churches are challenging places; parishioners thoughtlessly offer criticism on certain days. Musicians are easy targets for members to skin alive with their tongues. It hurts. Musicians struggle to trust anyone after a few rounds of such behavior. So, it is incumbent for pastors to field concerns from the congregation about the music ministry, but also to express appreciation and affirm their director to the congregation. Thoughtful critique should be passed along, but wild criticism should be corrected and curbed by the pastor. Musicians need to know that the pastor is for them.

Let’s talk about Yellowhammer Hymns. First off, it’s a beautiful collection of singable hymns for a congregation. I’m curious about where you made this album, how it came about, etc. Speak about that.

Andy: Thank you so much! We recorded this album over the course of nearly two years in the sanctuary of Christ Church, a vault inside of an old bank (our temporary office during renovation), and the living rooms of two gracious families with pianos. The sanctuary has incredible natural reverb, which gives the songs captured there a live-ness and density, but the bank vault also has its own magic. The songs tracked there have intimacy and stillness. I actually think that if we went into a professional studio, we would have lost something of “us” in the process. I’m glad we had to get scrappy and make it where we could, when we could, with the resources available to us. The making of the album corresponds with its purpose: it was written from the humble circumstances of a congregation for a congregation.

I see that a lot of different players are contributors to this album. Who are they and what is their story?

Andy: Each track reminds me of the players who contributed to it. Our music team ranges from high school freshman to recent retirees. Some of them have had previous experience recording, and some are brand new to it. They are not session cats. They are heart and soul folks you’d find at any church in any city, and they gave their all to make this record. I’m proud of what we accomplished together. This album is a gift to our church, and to the Church.

Why do you call these “hymns” and not “songs”?

Chuck: Our intent is to promote congregational participation in worship with lyrics that are theologically rich and tunes that are accessible and memorable. In our estimation, too much of modern worship orients towards performance. While a few tracks, like ‘He Bore Our Sins in His Body,” are less congregational, our main intent is to produce singable hymns that can be used regularly on Sundays and allow for full, boisterous congregational engagement. We prefer to use the term “hymns” because it reflects this specific purpose. Of course, we write songs, but “hymns” feels closer to what we are trying to do.

Where does the name Yellowhammer Hymns come from? What inspired the name?

Andy: When it came time to find a proper name for this project, we tossed a few back and forth through texts, but nothing really stuck. In our conversations, Chuck mentioned Psalm 104:16-17. I thought about what kind of bird might nest in a cedar of Lebanon. I searched for birds indigenous to Israel and found the Yellowhammer. It’s call supposedly inspired the first four notes of Beethooven’s fifth symphony. That bit of interesting history, and the uniqueness of the name, made it stand out to me. I shared it with Chuck and he gave it the thumbs up.

The album comes out May 8. What are your hopes for it?

Chuck: We put a lot of hours into this album, and we hope it will connect with congregations. It’d be great if these hymns helped churches in participatory, theologically laden worship. But, in the end, this album is an offering to God in and through Jesus Christ; who, for all the great things he has done and will do, is worthy of all praise.