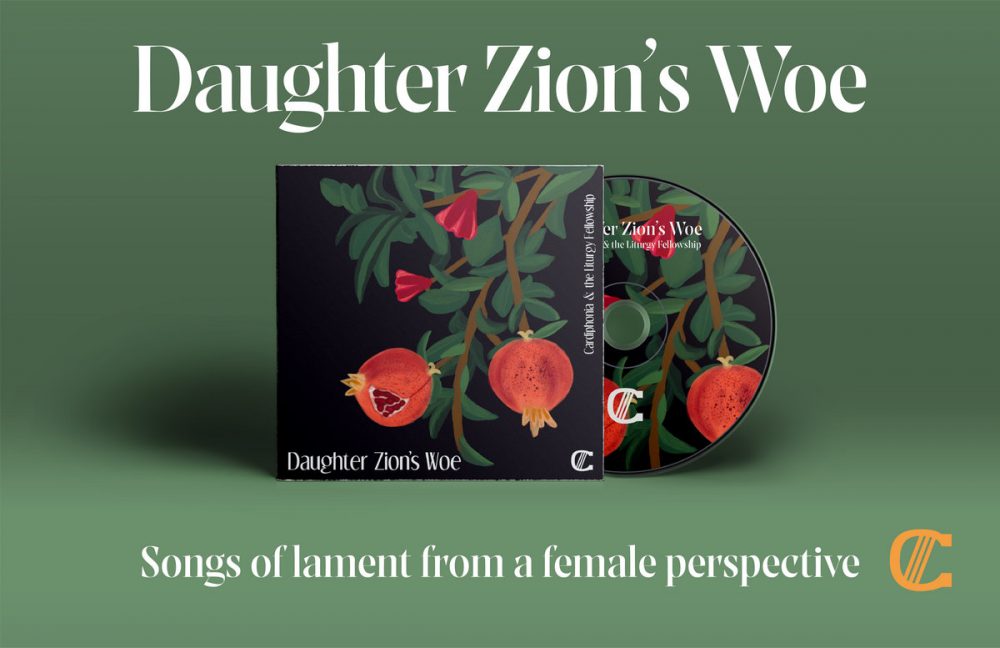 O Lord, draw near in my distress;
Hear my cry, my restlessness.
My soul gives way, darkness is near;
Yet in the storm I will not fear.”
— Keisha Valentina, “Sing Away the Dark”

“This song was brought forth out of the depths of a troubled soul on raging seas. Having struggled with debilitating anxiety since childhood and wrestling through hard things the last several years, I didn’t think I could write a single note when Rachel approached me with the project. Her response to my concerns was to “take all those anxious thoughts and turn them into something beautiful,” writes Keisha Valentina (“Sing Away the Dark”). “That resonated with me and reminded me of why I began to write music in the first place. It’s always been a place of comfort for me.”

Keisha’s piece is one of 13 songs on Daughter Zion’s Woe, a new album from the indie group Cardiphonia and Liturgy Fellowship, an international group of liturgically-minded musicians and songwriters. The album was produced by Rachel Wilhelm, a songwriter and self-described “worship leader missionary” who works for another international movement called United Adoration leading arts retreats around the world and now online. In an email, Rachel described the project as “an all-female lament project in response to 2020.” She says, “I found in my work as a musician and director of worship arts in the local church that women are the first ones to lay their art down for their responsibilities and obligations, resulting in females not participating in compilation albums like this one, leading music, songwriting, making an album, or learning how to record.”

Indeed, the artists who made Daughters Zion’s Woe have their hands full with “responsibilities and obligations.” Many of the women on the album are bivocational, balancing family, work, and art. Keisha Valentina (“Sing Away the Dark”) owns This Beautiful Mess, a house cleaning service in Spokane, Washington. She also writes hymn profiles for AnglicanCompass.com and music for her local church. Elise Massa (“O Sleeper Awake”) works full time as an administrative assistant at Duquesne University and serves alongside her husband at Church of Ascension in Pittsburgh, Pennsylvania, where they run the worship and arts ministry together

Elizabeth Duffy and Kaitlyn Ferry, AKA the musical duo Sister Sinjin (“Silence”), have a description on their website about the challenges of making music while balancing everyday life. They write, “We’re graduate students in theology and psychoanalysis. We have had a lot of children; been married to our husbands for a long time. Most of our creative process has happened with children surrounding us, in dirty kitchens and cluttered cars.”

Such circumstances may appear to hinder an artist’s ability to engage in her creative process. But the swirl of daily activity may in fact be the forge she needs to shape her art. As Sister Sinjin writes, “…what if creativity does not flow best into the limitless space we strive to create around ourselves? What if, instead, it is pressed out of us by the constant, repetitive, unending cycle of daily life? What if creativity is not the result of acting on our every desire, but rather what’s found after everything else has been drained from us? Maybe there, in the uncomfortable realities of our lives is where creativity is expressed, because it must be in order to survive the exhausting and the mundane. Maybe creativity is more incarnation than transcendence.”

Daughter of Zion’s Woe is unique not only for its multi-tasking female artists but also for how the album came about. With their lives sewn together through this project, the women of Daughter Zion’s Woe are a testament to what can be accomplished through a spirit of collaboration and unity. Bruce Benedict, Creative Director of Cardiphonia and founder of Liturgy Fellowship, wrote that “One of the reasons I started putting together compilations was that I realized that very few artists have the time and the money to put together entire albums, but it’s relatively easy to get one song written and finished. With most of the artists I have worked with, there is a higher value placed on collaboration and encouragement than needing to (primarily) support yourself financially.”

Some of the women on the album had access to recording equipment, while others needed help to produce their recordings. Men from Liturgy Fellowship volunteered their time to produce the record, helping with arrangements and post production. “This was a beautiful example of men uplifting women,” said Rachel.

As implied by the title, Daughter Zion’s Woe leads the listener on a path of lament. Ensemble group Urban Doxology opens the album by proclaiming God’s presence in the midst of darkness on the rhythmic “Where We Are.” The proclamation is then juxtaposed with questions of God’s apparent absence in Advent Birmingham Music’s contemporary ballad “This Dry Land” and Rachel Wilhelm’s bluesy “O Father Do You See.”

The album pivots to calls for God’s help in Keiko Ying’s orchestral “Only You,” Keisha Valentina’s “Sing Away the Dark,” and Eden Wilhelm’s blues guitar-driven “Lord, Draw Near.” Sister Sinjin’s “Silence” evokes the uncertainty of waiting for God. Lo Sy Lo’s ethereal “Let It Be So,” Christy Danner’s delicate “The Glory Shall Be Thine,” and Elise Massa’s mournful “O Sleeper Awake” then evoke a longing for God to execute justice and bring about meaning from suffering.

The album moves the listener towards the redemption found in Jesus with Rebekah Olson’s “Covered” and Shelly Moore’s reimagined “Leaning on the Everlasting Arms.” Finally, the themes are combined together in Karin Simmons’s “Restore Us” as a hope-fueled petition to God for restoration in the midst of trials.

The music is as complex and diverse as the musicians. Some songs lend themselves to congregational use, while others may be best enjoyed in a more intimate, contemplative setting. “Silence” from Sister Sinjin uses tight vocal melodies, electric guitar, and solo saxophone to meditate on waiting for God. Keisha Valentina’s delicate harp accompaniment on “Sing Away the Dark” is joined with soaring strings and harmonies she stacked herself, giving the vocals an especially pure quality. The accordion, harp, piano, and strings tell the story of God’s redemption in their redemption, singing away the dark with their colorful sounds. “Leaning on the Everlasting Arms” rearranges the classic Baptist hymn with electric guitar and Shelly Moore’s strong vocals. The music nods to the original, transforming the triumphant march into a heavenly ballad of hope in the face of distress.

Rachel said this about lament: “Oftentimes one feels marginalized when they are in a state of lament, or should be in a state of lament. Moments of crises come to everyone, and hopefully our first act is to go to the Lord in those times. Some crisis moments are so difficult that words are too much to utter and silence is all we can muster. God wants us to come to Him with all of it because He can take all of it, and even wants to. Mostly the answer to lament is God Himself — or the uttering of the pain to God Himself. Lament is an act of faith. Lament, no matter how much doubt may be in the soul, is an act of belief that God can hear and see if He wants to.”

Sung as an act of faith, songs of lament lead to songs of praise. Says Keisha, “The minute I begin to worship, the anxiety flees and my soul is at rest. That is why music means so very much to me. I can’t write about anything other than the God who saves, because he has saved this weary, restless, tired soul time and time again.”

In this coronavirus world we are navigating, where our grandmothers are confined to their nursing homes without human touch, where political tensions divide congregations, and concerns about singing have silenced the sound of the congregation, the songs of Daughter Zion’s Woe give voice to the internal fears and anxieties we are feeling and helps us bring them to the only one who can make it right.

Listen to the Album